Modern Tapestry – Between art and craft 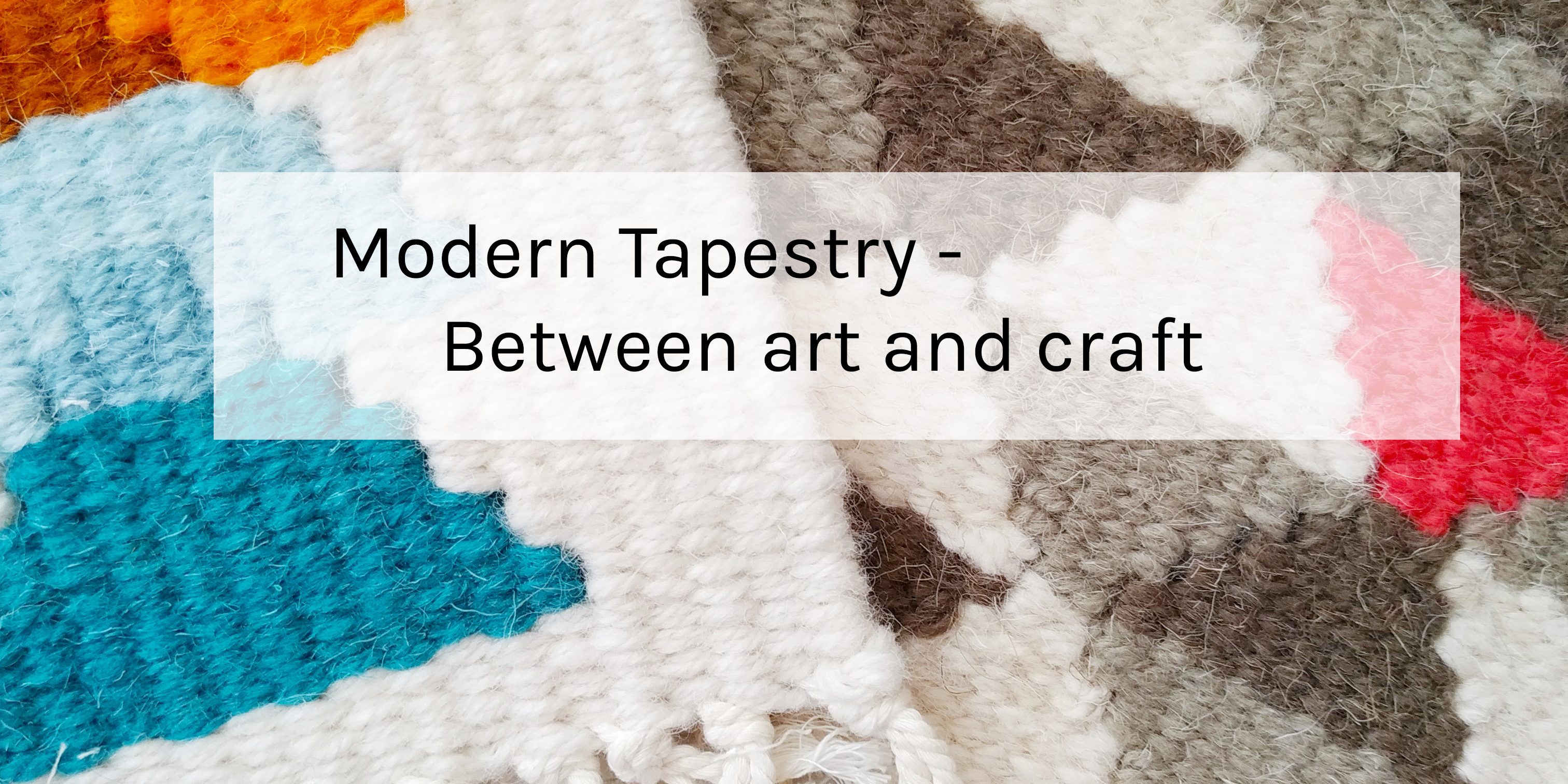 Today I want to explore the fascinating world of tapestry weaving!
Like many fibre arts, tapestry still has the reputation of being dusty, old-fashioned and has-been.
I must admit I thought the same only two years ago…
Until I discovered at the first one, then two and then a whole new world of stunning tapestry artists and radically changed my mind.
I explored the long history of this art form and the tension in modern tapestry between art and craft.
Thought this might be really worth to share and hopefully, after this article, you will go hands in hands with me and say: “Tapestry is an incredible, fascinating modern textile art form!”
So here we go, let’s dive together!

1. First things first: What is tapestry?

Tapestry is a specific catégorie of weaving to create images rather than utilitarian fabric:

” TAPESTRY is a discontinuous weft-faced woven structure that creates image! “

Below a wonderful example from Marion Weymes called “Searching for sunlight”

And: True tapestry can only be woven by hand!! Until today it’s impossible to reproduce tapestries by machines, due to its discontinuous structure.

The early states of tapestry are unclear, as actual survivals are very rare. But since the high and late medieval period tapestry started to be the grandest and most expensive medium for figurative images in two dimensions in Europe until at least the end of the 16th century.

In this period tapestries were monumentally sized wall-hangings showing battles, unicorns, bloodied martyr and the courts of kings. Royalty and rich patrons commissioned these large tapestries, which were an opulent way to communicate status and wealth, but also a way to communicate with a largely illiterate populace.

One reason for the success of decorative tapestry in this time is explained due to its portability.

Kings could fold up and transport tapestries from one residence to another.  In churches, they were displayed on special occasions. Tapestries were also draped on the walls of palaces and castles for insulation during winter, as well as for decorative display. For special ceremonial processions such as coronations, royal entries and weddings, they would sometimes even be displayed outside.

These monumental tapestries were first designed by an artist who generally painted a full-scale cartoon.  Afterwards, a group of skilled artisans copied the painting and might work a decade to produce one set of tapestries

The weavers of these tapestries were usually male, as the work was physically demanding; spinning the threads was usually a female preserve.

Tapestry is woven from bottom to the top, each woven line supports the ones above it. This needs some planning and most tapestry weavers draw until today a cartoon to guide their work.
This cartoon is fixed behind the loom to follow the dessin while weaving or the drawing is copied directly onto the warp threads.

Weaving from the front or the back?

Today, most independent tapestry artists work nevertheless from the front.
You can see exactly what you’re weaving and your view will not be obscured by tails.

Weaving across in a line versus building up shapes

Today it’s a question of preference and some weavers even use both techniques in the same piece.
Which technique you want to use can be dictated by the image you’re creating too. If your image has a lot of horizontal elements with interlocks side to side, it might be better to work line by line. In contrast, if the works are more graphic with distinct shapes, it may be better to weave one shape at a time.

In fact, every device that can hold a set of warp threads with some tension will work as a loom. Nevertheless, there are naturally some looms dedicated especially for tapestry:

These terms refer to the orientation of the warp and the way that you weave on the loom. A high-warped loom is one that holds the warp threads in a vertical orientation, while a low-warped loom orients the warps horizontally.

Most people who want to try tapestry will start with a frame loom. These looms are portable, less expensive, and provide an easy entry into tapestry weaving.

Tapestry weaving on a low-warped loom by Christabel Balfour

You can weave with almost anything that is flexible and fibre like.

Warp should be strong enough to withstand the constant abrasion caused by opening the shed and he has to hold a tight tension. Today most tapestry weavers use warps of wool or cotton.

A good weft should be a firm yarn that packs in easily and makes a sturdy fabric. Weft yarn doesn’t have to be as strong as the warp, as it doesn’t have to withstand the tension of the loom. The yarn shouldn’t be too lofty, stretchy or soft for tapestry.

5. Modern tapestry – between art and craft

One one side a few weaving workshops in the world operate still in the manner described in chapter two: an artist designs an image that is afterwards copied by several weavers sitting side by side. Only today they produce mostly modern, unique images which could concurrence every painting largely.

Examples are the Australian Tapestry Workshop in Melbourne, the Manufacture Nationale des Gobelins in Paris, the Manufactures d’Aubusson and the Dovecot Studios in Edinburgh.

On the other side a completely different “contemporary tapestry scene” has been evolving since 1970.

A worldwide shift in what was possible in creative expression was set in motion. Threads freely suspended, coiled or in some manner formed into monumental sculptural forms, took over galleries and expositions. The 1970s were a decade where fibre art called now  “New Tapestry,” was on the cutting edge of art.

This changed again once entered the 21st century. Accessible computer-aided weaving options and other “quick” systems for producing artwork, made “slow” tapestry weaving less attractive for young artists. Surprisingly, at the same time that weaving seemed out of favour, fibres had become one of the two most popular majors for art students. Computer savvy young artists expected speedy results and these emerging artists also questioned the notion that art must be made by hand.

This changing perspective though has finally become a motivating factor to question once more the traditional constraints about what techniques are appropriate for tapestry. A new vague of tapestry weavers emerged over the last decade, attracted by the straightforward qualities and simplicity of tapestry weaving.

The pressure to produce large work is lessened today and besides taking less time, small format work lends itself to experimenting and risk-taking. Today the variety of what may be called “tapestry” is broader than ever and several artists developed a very distinguished style, miles away from what most people would qualify as a tapestry.

Summarising, the biggest difference of “modern tapestry” in comparison to “traditional tapestry” might be:

To finish, a very personal glimpse of some modern tapestry artists to arouse perhaps your curiosity to discover further.

And last but not least, some of my own, very modest trials…..

Thanks to all artists who allowed me to share their remarquables  works!

Catégories
Haut de page
We use cookies on our website to give you the most relevant experience by remembering your preferences and repeat visits. By clicking “Accept”, you consent to the use of ALL the cookies.
Cookie settingsACCEPT
Manage consent