Weaving with a self made loom 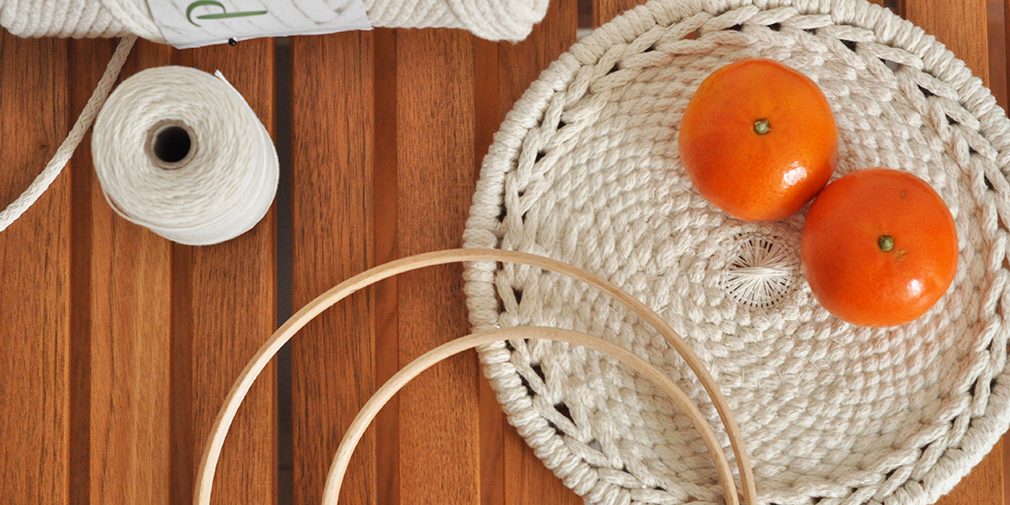 Today the fourth post of my little series about weaving adventures! (First one with general explications here, second one about weaving without a loom here, third one about my Bento bag here). I use the book Weaving within the reach as an inspiration to try out different techniques – this week I wove two objects with simple, self made looms.

1. First I made the “Cotton Trivet” from the book using a wooden circle:

For this project you “convert” a simple embroidery hoop in order to use it as a loom. (Actually I don’t used an embroidery hoop but a simple wooden circle I found in this shop as I don’t like the look of the embroidery fixation). The idea of using  a circle for weaving attracted immediately my curiosity and from the beginning this was a “must-made” project.

You need further a fine twine to create the warp and ideally a bulky weight cotton yarn for the weft, though I think you could take whatever yarn you want here.  I used a simple cotton twine I bought in the supermarket for the warp and a chunky cotton twine called “Paulina”, I ordered at Lankava a month ago, for the weft. The Paulina twine is very nice, but perhaps not ideal for this project. The original yarn is flatter, more ribbon-like, while the Paulina is a very round even plump.

A little photo of the beginning:

I love the finished result and surely this one will  get some use in my household. Would love to make perhaps a set in different sizes or try some other colours and yarns in the future.

By the way the knot used for the last round before the wrapping part is a Soumak Knot! I know it’s used a lot in tapestry weaving and I really like the structure it produces here.

2. Secondly I made the “Twill Cowl”  using a simple cardboard piece as loom:

I must admit I started this project really only because of the twill pattern.

Twill is a type of pattern in weaving that creates diagonal, shifting ribs in contrast with plain weave, that’s a simple criss-cross pattern.

For twill you pass the weft thread over one or more warp threads then under two or more warp threads and so on  offsetting the rows to create the characteristic diagonal pattern. Because of this structure, twill generally drapes well and it’s a bit more elastic than plain weave.

In contrast, for plain weave each weft thread crosses the warp threads by going over one, then under the next, and so on, which produces a very strong, balanced and hard-wearing fabric.

On my Riggid Heddle Loom I only produced plain weave fabrics so far. When I read about this cowl that it was made in twill pattern I absolutely had to discover!

Here a close up photo of the twill structure:

The cowl is simply woven around a cardboard loom. I took a simple package cover, that’s all.  You warp the yarn around the cardboard lengthwise and fix the beginning and ending with a clip. Afterwards you start to weave the twill pattern that’s given in the book for example.

I used a cheap super chunky yarn from a LYS , Creative Twist from Rico Design. I wasn’t sure if I’ll really get use of this cowl, it was more an experiment, so I don’t wanted to spend too much money. But I love the coolish brown colour a lot and I must admit that the cowl seams to be more wearable than I thought, even the yarn is very soft against the skin… so perhaps nevertheless I’ll even wear it…