You are here:
Latch Hooking 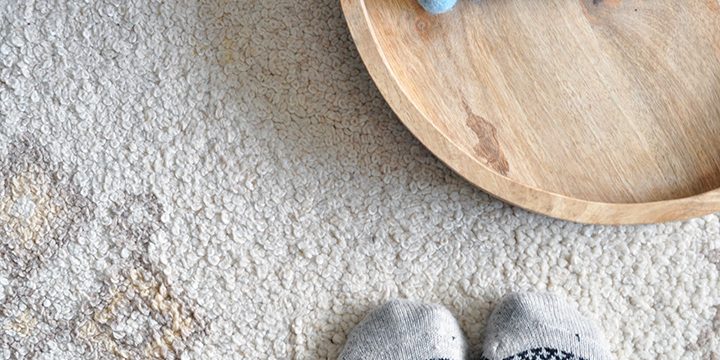 “Latch hooking is a technique to create a fabric by pulling loops of yarn or fabric through a stiff woven base by using a hinged hook to form a knotted pile from short, pre-cut pieces of yarn.”

Ahh…. to make it a bit clearer here the material needed:

And the technique to knot itself:

The base is in general a kind of “Stramin”, a woven, rigid grid. Additional you need some precut yarn and a latch hook, a kind of crochet hook but with a latch to close. That’s all.
Latch hooking is in generally used to make rugs, a technique “en vogue” in Germany 40 years ago. I still see my grandmother and mother sitting in front of their rugs the whole winter. Naturally it’s possible to make other objects with this technique too, like cushion covers or wall hangings for example ( you can see a wall hanging example from my mother made 1973 at the end of this article).
Five years ago I suddenly decided that we need a rug for our living room. And naturally a handmade rug! I remembered my mother and latch hooking and wondered if you still could by somewhere the materials ? After some research I found one shop in Germany that still sells everything necessary: Junghans Wolle . You could even buy rug kits there and that’s what I did. Unfortunately I didn’t find a design I immediately fallen in love with , so I decided to go with a neutral, light “Berber” style rug to test latch hooking:

It’s very cosy and sturdy at the same time and I’m in love with this rug making technique. It’s not difficult, but very time consuming, nevertheless the finished rug is a real heirloom piece, my grandmother’s rug looks still like new and could last another generation.
For some time now I want to make a second rug for our bedroom… but this time I want to make a design by my own instead of using a kit. It’s in my head for over 6 month now, I ordered some materials to play with, I made a little sketch…and I’m still there…so my objective for the end of this year is to finish at least a little sampler of my idea and to order all the material necessary to start in January my new rug!!

Would be interested to hear if someone else practice some latch hooking these days?